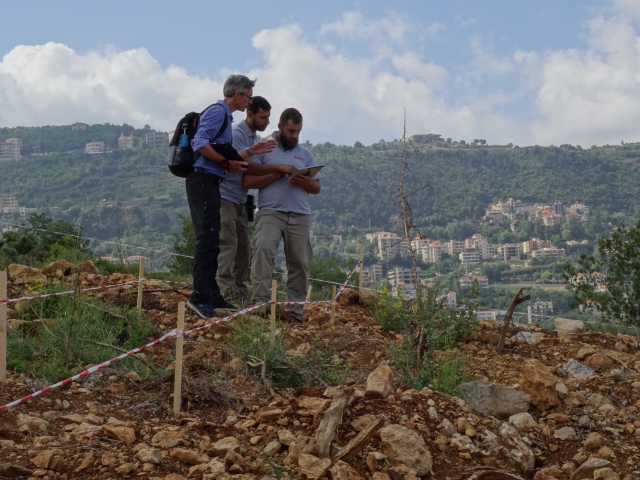 During the course, a complete documentation of the different suspected and confirmed hazardous areas in the training area were made in T-IMS. Points, lines and polygons were drawn and categorized. Photos were taken, videos captured, interviews were made and also added to locations in the map module. Dummy ordnance objects (land mines and cluster munitions) were identified in T-IMS’ ordnance module and likewise positioned in the map, either by pointing out their position/location in the map, by letting the GPS decide the their current position or by use of a laser rangefinder (TruPulse360R) that calculated, generated and automatically positioned the ordnance object in a distance. Furthermore, the GPS tracking facility was also used to create track lines and documentation of walking paths and routes, eg. between the benchmark and the starting point.

During this day, the QA-teams were also performing quality assurance activities on the other land release activities in the training area. At the end of the day, daily reporting was made by the site supervisors and finally all the field activities were uploaded and shared.

This T-IMS training was for the upcoming start of T-IMS pilot project.

This website uses cookies to improve your experience while you navigate through the website. Out of these, the cookies that are categorized as necessary are stored on your browser as they are essential for the working of basic functionalities of the website. We also use third-party cookies that help us analyze and understand how you use this website. These cookies will be stored in your browser only with your consent. You also have the option to opt-out of these cookies. But opting out of some of these cookies may affect your browsing experience.
Necessary Always Enabled
Necessary cookies are absolutely essential for the website to function properly. This category only includes cookies that ensures basic functionalities and security features of the website. These cookies do not store any personal information.
Non-necessary
Any cookies that may not be particularly necessary for the website to function and is used specifically to collect user personal data via analytics, ads, other embedded contents are termed as non-necessary cookies. It is mandatory to procure user consent prior to running these cookies on your website.
SAVE & ACCEPT